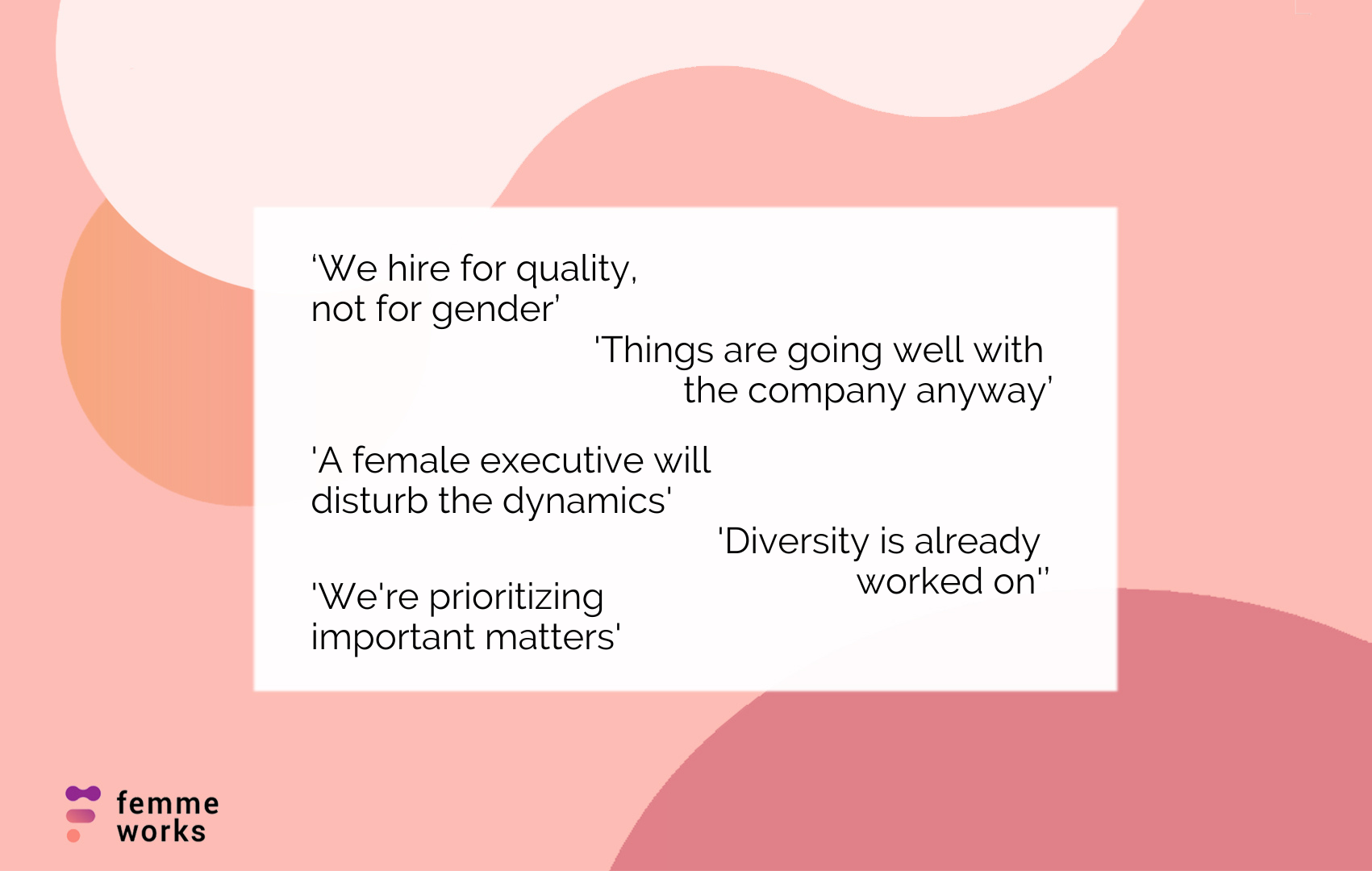 As a headhunter for women, I have heard a lot of reasons in recent years for not appointing more women. Or should I say ‘excuses’?

Organizations are usually positive about a diverse workforce and things are definitely improving. Still, some companies seem to be dragging their feet. Often there’s an excuse to be found why gender diversity has not actively been worked on. As a result, the share of women in executive positions in The Netherlands – and elsewhere – is still behind (SCP, 2020).

With the experience of a headhunter for executive women, Femme Works lists the most common excuses for not appointing female leaders:

Excuse 1. We hire for quality, not for gender.

A common argument is that a company does not want to practice positive discrimination. It is considered unfair to hire women based on gender. We agree that a so-called ‘token female’ doesn’t do anybody any good. In the end, a female leader has to prove that she is competent for the designated position.

Nonetheless, we do ask companies to take a closer look at their ‘quality’ standards. What soft skills do you consider in the recruitment process? Are you looking for someone who put one’s foot down? Or could it be an addition to the team to approach things slightly differently? Something to reflect on if you take gender diversity seriously.

Excuse 2. Things are going well with the company anyway.

It may happen that the management team is not aware of the numerous benefits of having a diverse workforce, if after all ‘the business is going well’. On a positive note, a high-performing company with resources has the chance to do it better.

Did you know that organizations with a relatively large number of female leaders create more shareholder value (Catalyst, 2004)? That a mixed team is more innovative (Carter, 2003)? And that the work processes improve with a diverse team (Gratton, 2007)?

Excuse 3. A female executive will disturb the dynamics.

If there are only men in the management team, there may be a certain restraint to welcoming women. A woman could position herself differently and ask distinctive questions. As a result, the team dynamics are likely to change.

What if it’s for the better? Our experience tells us that breaking through a male-dominant culture can help to reduce gender stereotyping. Besides, women are more likely to use the most effective leadership styles than men (Eagly, 2003). In addition, women bring perspective, and they tend to build close relationships with colleagues, which benefits the working atmosphere.

Excuse 4. Diversity is already worked on

That sounds nice in the first place. But if we zoom in, things are not always what they seem. In recent years, societal pressures to improve gender diversity in top management and boards have significantly increased. As a consequence, organizations feel the obligation to change the image on the outside, but not necessarily from the inside, the so-called ‘window dressing’.

Perhaps ‘gender diversity’ is on the agenda, but only for the year 2030… It turns out to be fairly easy to hide behind the excuse that ‘it is already being worked on’. With this attitude, organizations ultimately shoot themselves in the foot. If you want to make the most out of female talent, diversity must be taken seriously.

Excuse 5. We are prioritizing important matters

Diversity, particularly in leadership positions, does not happen by itself. A conscious change of course from the top levels will have to take place to actively get started – for example by hiring a headhunter for women. A frequently heard excuse is that the board is ‘prioritizing more urgent matters’, such as a pandemic or a war. With this mindset, real change will be a long time coming.

The numbers don’t lie: with a 28th position, the Netherlands scores (well) below the European average in terms of the share of female managers across all management layers (CBS, 2019). The representation of women on the board of directors of listed companies is only 12%, far behind the target (CBS, 2020).

As a company, you contribute to society by showing (your children) that women can also hold top positions. Talent is divided equally between men and women, and that must be reflected in top positions. No excuses.

Do you need help with the recruitment of female (executive) candidates within your organization? Feel free to contact us.